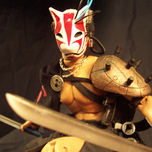 The Heritic
The 13 Ronin started out as a bunch of characters for the Rifts RPG I used to run. The whole game was set 300 years after humanity had pretty much leveled itself, and killed off most of the population. Long lost magics re-appeared, and mankind was slowly rebuilding from the ashes. Every part of the world reacted to the apocalypse differently, so it was a limitless setting to create diverse characters, tell diverse stories, and always was a great start to a million ideas that, over the years, generated in my head.

The Japan that survived the apocalypse was divided by polar opposite ideologies. The traditionalists believed that technology brought about the downfall of civilization, and only by returning to their ancestors' values could they hope to survive in this new world of demons and monsters. These were the people who embraced mysticism and ancient weapons, and lived in a sort of mystic feudal society. The survivors in the cities viewed the traditionalists’ mysticism as no more natural than the monsters that had appeared throughout the countryside, and that technology was man’s only hope to crawl from his own ashes.

Set with this as a backdrop, I started working on a plotline revolving around 13 ronin; rogue samurai who had once shared a common origin. After years separated, one begins to gather the others, all of whom have wound up in different strange and interesting places. That’s the general idea, at least.

As the concept for the 13 ronin evolved, I started wondering if it was a story that could stand on it's own, outside of the RPG roots it grew from.
Powered by