​From a young age, the Lenkov brothers were notorious in Dog's Warf.

Corbin and Abel were born three years apart, their mother leaving shortly after Abel was born, leaving them with a father who spent most of his time drunk.  The Lenkovs were neighbors with the Maudslays, who took it upon themselves to do whatever they could for the boys. They welcomed them both of them into their home, and provided the only real structure and sense of family in both boys' lives.  Corbin was fascinated by Abraham Maudslay, Thornapple's father, and took every opportunity to spend time with him in the family's machine shop, learning everything he could.  Growing up very closely with Thornapple and her best friend, Delia, both the same age as Abel, the four were practically inseparable,  and Corbin has always been extremely protective of all three.  When the war against The Blight began, Thornapple's parents both were pulled into the war effort.  Still young and with little structure in their lives, the kids found plenty of time to get into trouble, and petty theft and mischief continued to escalate until they attracted the attention of a local gang, The Savage Nation.  As the oldest of the group, Corbin did his best to focus all of their attention on him, starting out as a lookout, runner, and cornerboy for the gang.  The bit of money he took in allowed him to help out in his family, and he realized he had a knack for the life that would draw him deeper and deeper into that world.

Corbin was thirteen when their father found local factory work in support of the war effort, in the manufacturing of Vandervelt Crystal Arrays.  The Blight devoured and twisted magikal energies, leaving the lands themselves devoid of any powers for witches to draw upon.  These barren lands became one of the biggest obstacles for witches fighting the war in blighted territories.  The crystal arrays were developed to transport arcane energies over great distances, a technological turning point.  But construction was extremely dangerous, and the crystals could be very volatile until properly refined and housed.  The explosion at the Paulsburg Facility would claim the lives of over five hundred workers, and leave Corbin and Abel orphaned.  While ruled as an accident, many still believe it was sabotage.

His father's death, as well as the death of Thornapple's mother the year before (who had been far more family to him than his own father) eroded what little normality Corbin had in his life, and his involvement with The Savage Nation continued to deepen.  Angry at the world, his aggression and constant fighting ingratiated him with the gang, and by seventeen, he had earned his place as a respected enforcer.  Abraham tried his best to steer Corbin off of the path he was taking, but he always knew there was only so much he could do for the boy.

For years, The Savage Nation had been at war with a rival group called The Disciples of Violence, a constant push and pull for power in Dog's Warf.  It all culminated in a brutal battle that lasted three days, and became known as The War of Blood and Ash.  Corbin avoids talking about his role in the carnage, but by the end, both gangs suffered heavy losses.  Many from both sides were arrested, Corbin among them, and were offered a choice: prison time, or a full pardon in exchange for enlisting in service of the Four Great Houses in the war against The Blight.  As more and more territories were lost, and stories of horror were told about the blighted lands, many opted for prison.  Corbin took the deal.

The Great Houses were losing the war.  The Blight was an enemy like no other before, twisting reality and able to taint those it touched.  Regular soldiers were especially susceptible, as magik offered some protection, and as so many witches were lost, each death brought them closer to complete annihilation.  Occult think tanks were formed with the goal of creating new magikal applications, one of the most successful being the development of a powerful ritual spell to be known as Ostermann's Crux, and the forming of a special operations force called The Breakers. Each Breaker platoon is organized around a central War Witch, and Ostermann's Crux allows her to channel magik energies from a focal point to all the soldiers under her command.  With no innate magik abilities of their own, the spell makes them stronger, faster, more aggressive, resilient, dulls pain, and offers some protection against the effects of The Blight.  A supernatural shock troop, they were deployed into some of the most dangerous battles in the war.  Because blighted enemies often developed abnormal physiology, weapons were developed to inflict absolute and overwhelming damage, and standard equipment include the H-26v chain-driven rotating blade system, usually called the Hungry Knife, or HK for short.  They were also issued a PMW-4,  Personal Magikast Weapon, a double barreled handgun that could be loaded with individual shells, each able to fire off a single destructive spell.  Most Breakers insist the acronym really stands for "poor man's witch" or simply refer to the weapon as the Spell Chucker.

In The Breakers, Corbin excelled, engaging in a series of successful campaigns across the blighted lands.  He enjoyed the camaraderie of his platoon, men and women who often came from similar backgrounds to his own, some even old friends from The Savage Nation that he was reunited with.  And he was good at it.  Ferocious in battle, he was cool under pressure, quick thinking, and well respected by his peers and commanding officers.  The war was beginning to turn, and he had started to feel like he had found the place that he belonged.  That was until the Massacre of Raynsford's Keep.

Considered one of the single bloodiest battles in the war, tens of thousands were lost in a single battle.  They were deep in blighted territories, when they encountered monstrosities like they had never seen before.  The creatures of The Blight had continued to adapt and evolve, to grow and change.  Any routes of escape were cut off, and the remaining forces made their stand in the ruins of the old Raynsford Castle.  Corbin lost his left arm in the battle and as he lay bleeding on the roof of the keep, he was dragged aboard the burning remains of the airship The WIV Birger, barely making it back to safety.

Corbin insisted on returning to active duty as soon as he was able, and was fitted for a mechanical arm, grafted by occult technologies.  He trained with it constantly until it was almost as natural as his own, and continued his service resolutely, although troubled nightly by bad dreams.

He was stationed close to home when the Blight reached the walls of Equinox.  He was deployed immediately, and was on the front lines of the city's defense in the decisive battle.  His leg was severely injured, tainted by The Blight, but he continued to fight, knowing this would be the end for him.  He was again pulled to safety, only minutes before the casting of the Syncretic Cataclysm Evocation, the powerful spell that raised the Great Wall, destroying everything for three miles beyond and creating the sea of glass.

While able to purge the Blight infection, no magik has been able to heal his leg completely, and he would require a brace for it for the rest of his life.  He received multiple honors and commendations, and was honorably discharged.  Returning to Dog's Warf, he has opened a small shop where he tattoos, and takes on odd mechanical jobs to make ends meet.  But as his childhood friends become more involved in the secret histories and shadowy conspiracies that shaped their world, it is only a matter of time before Corbin finds himself pulled in as well. 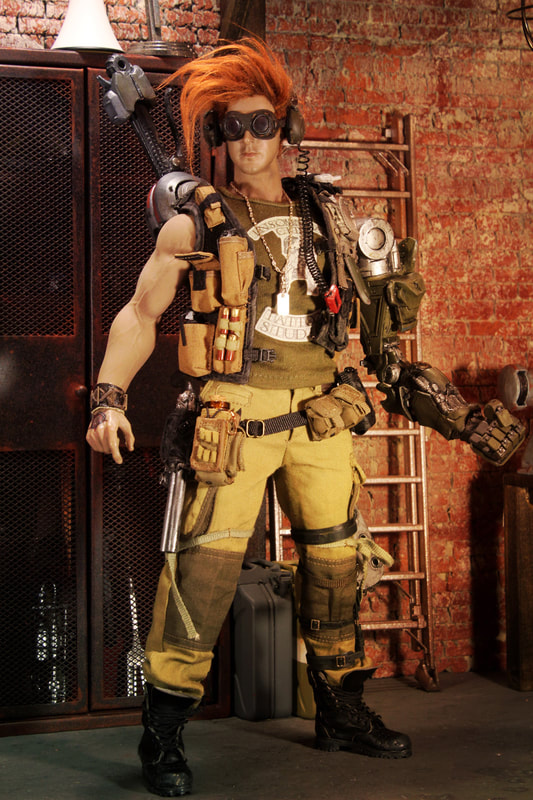 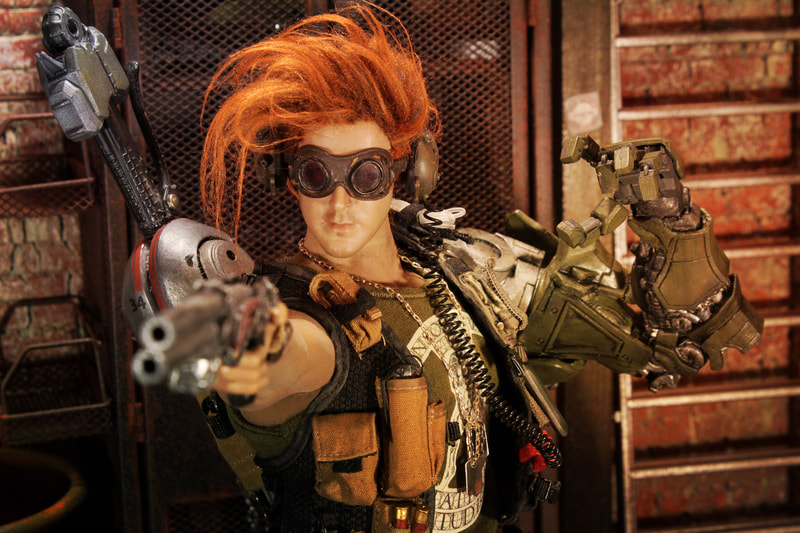 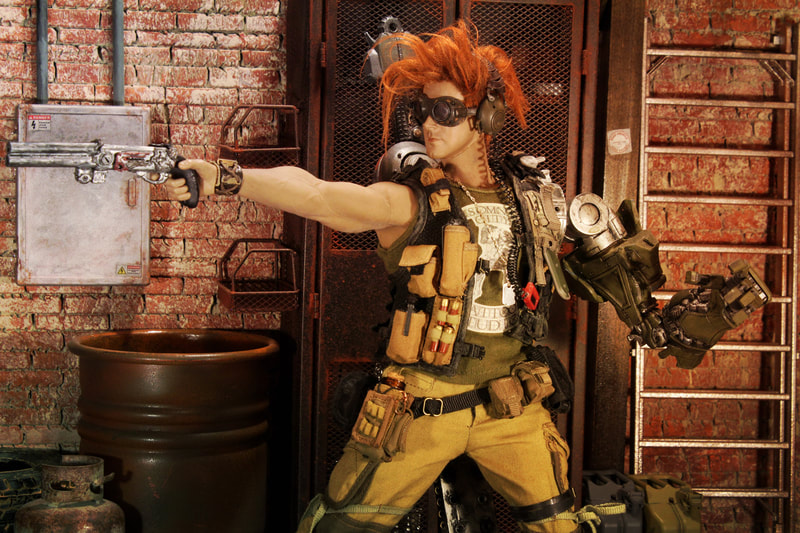 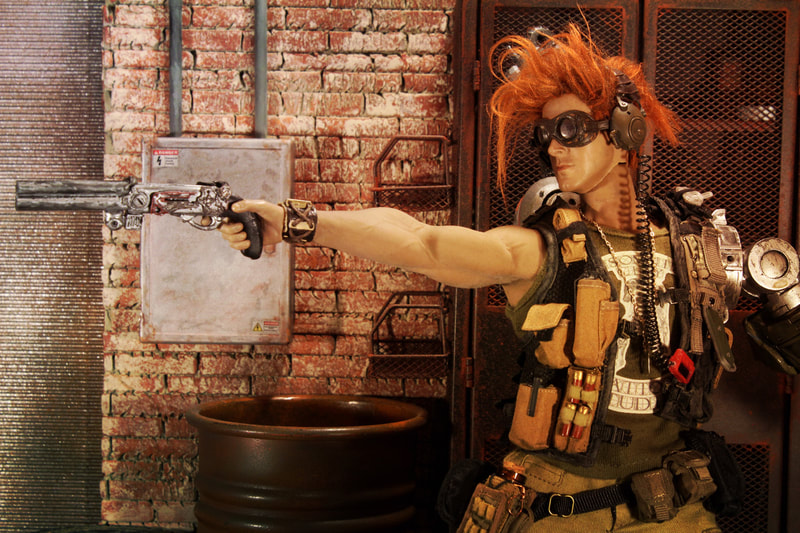 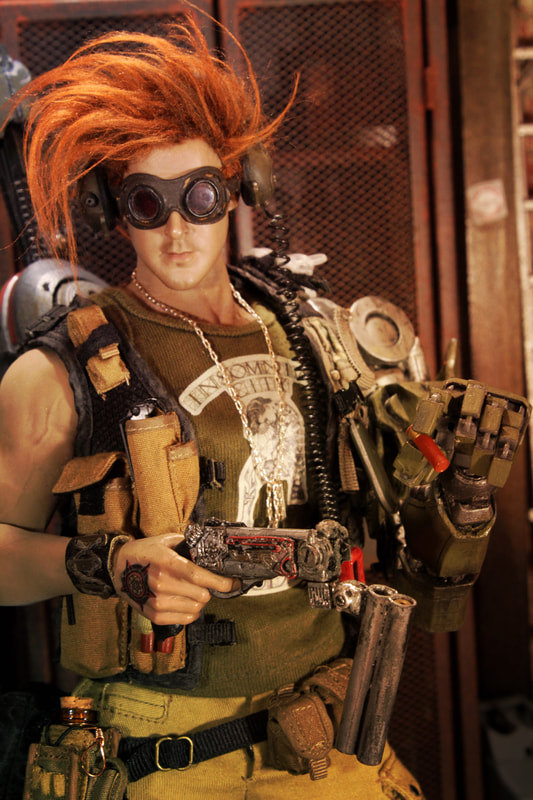 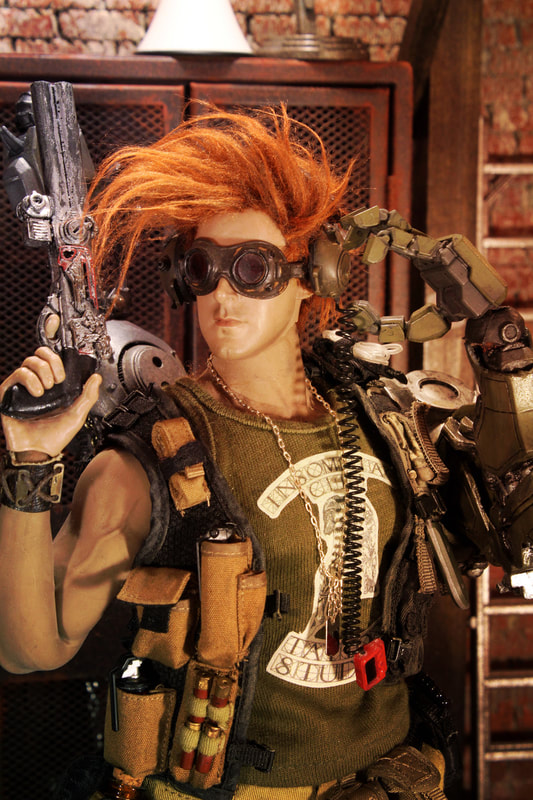 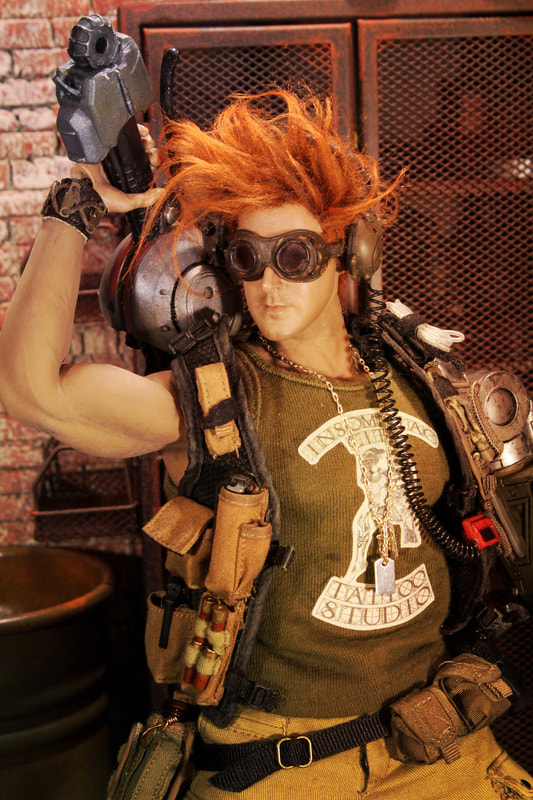 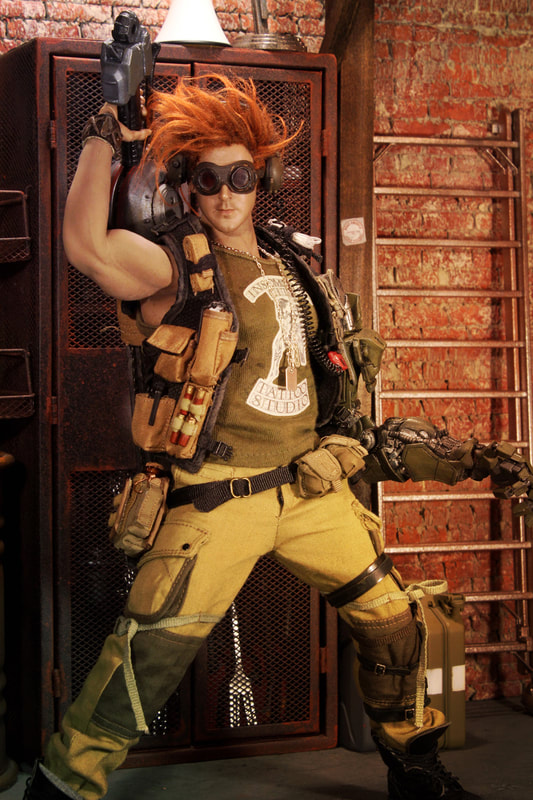 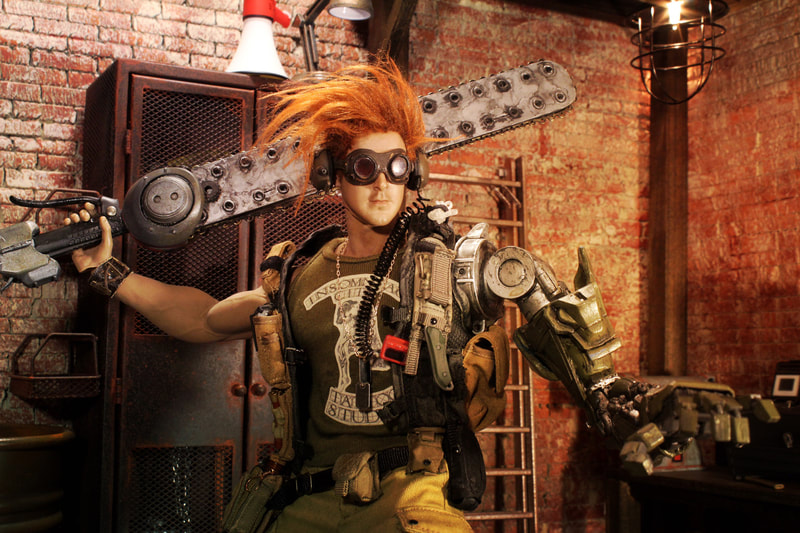 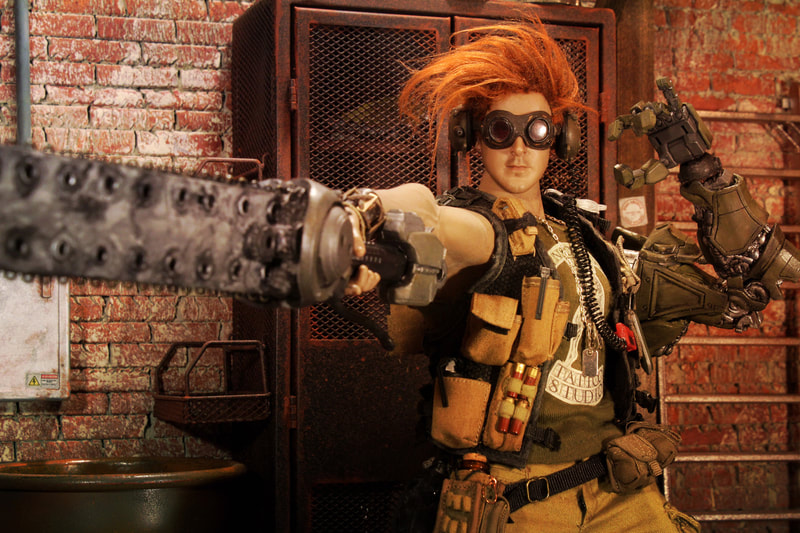 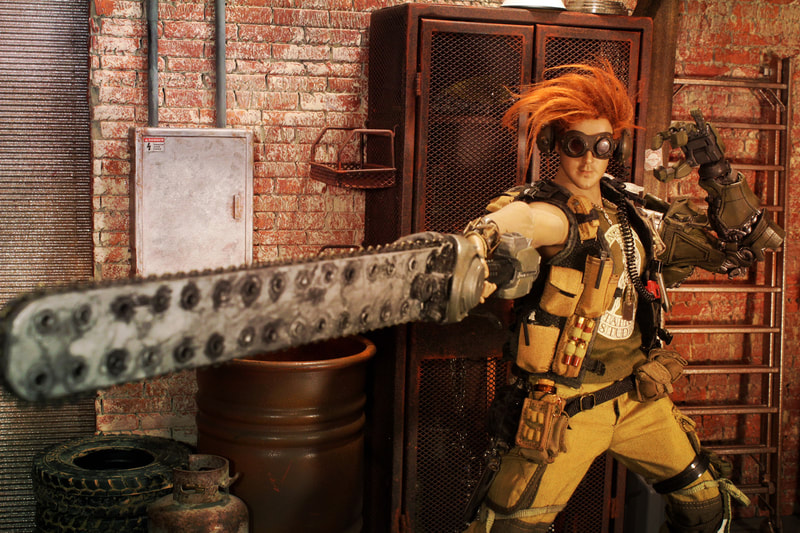 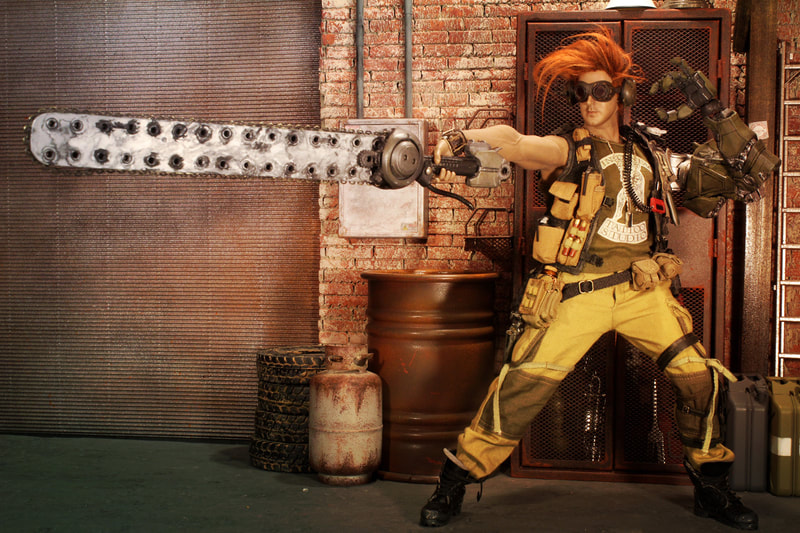 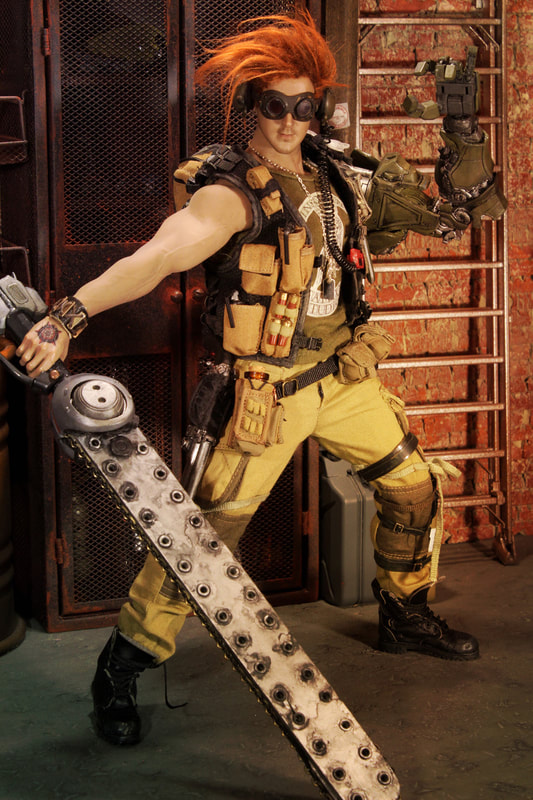 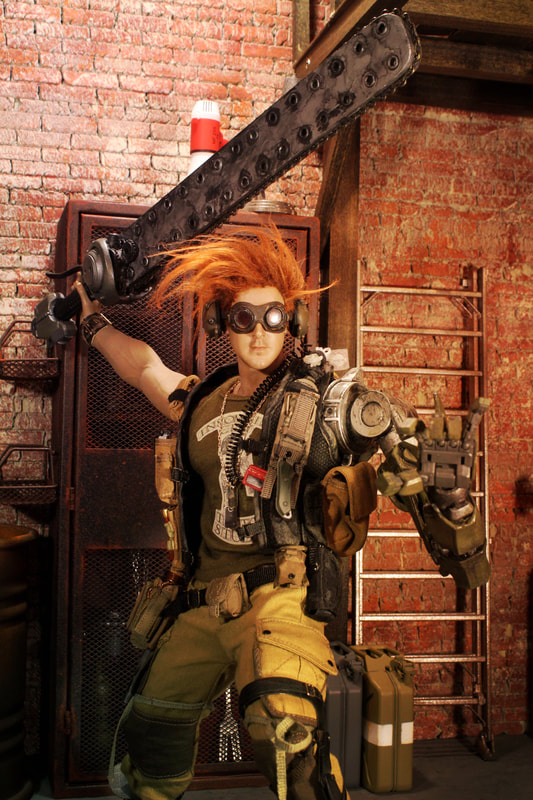 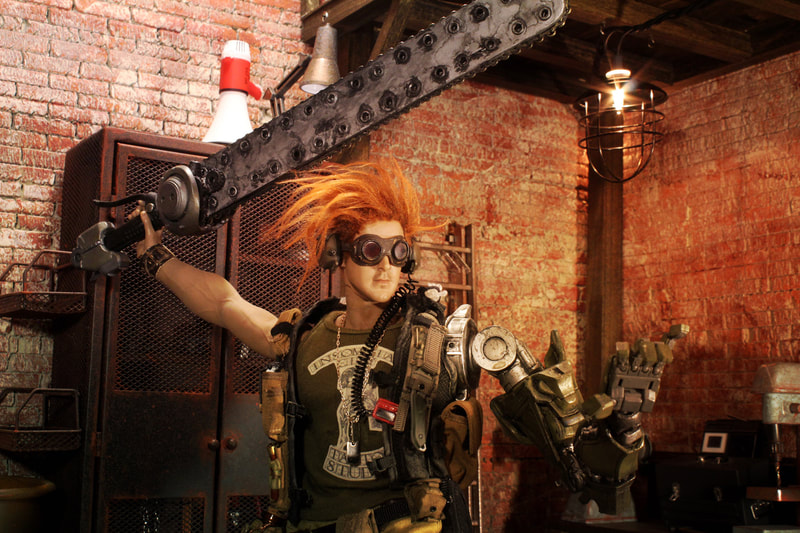 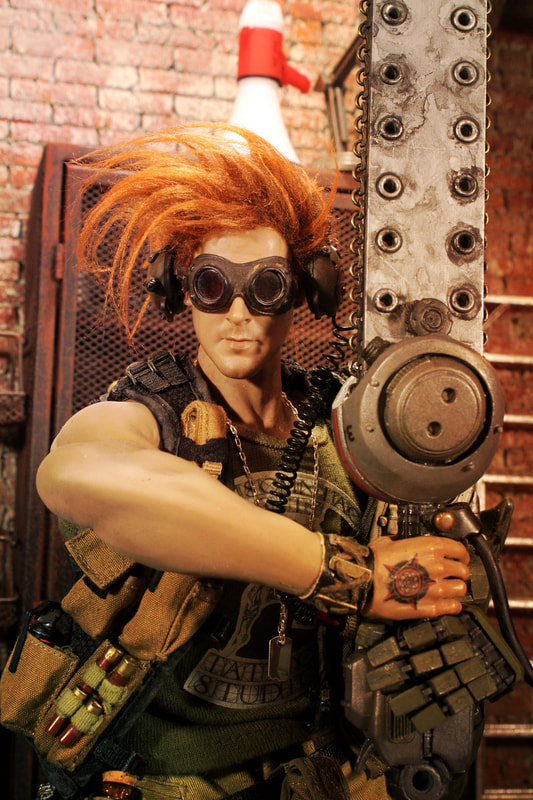 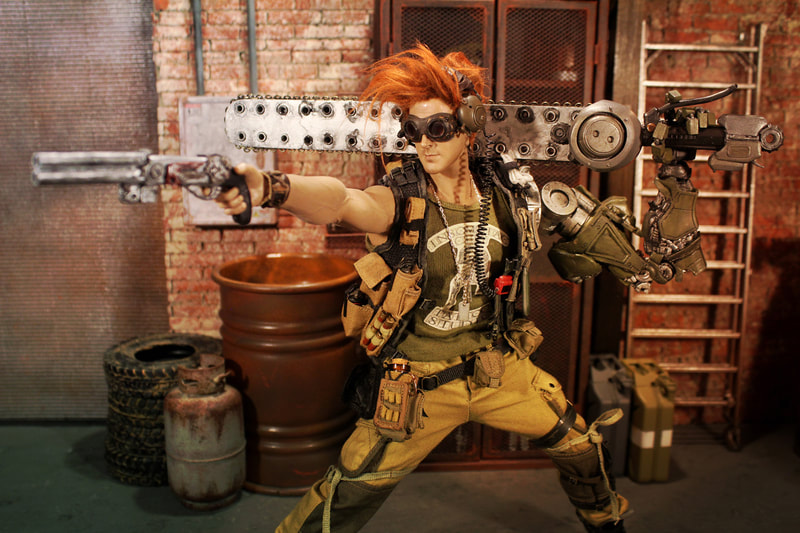 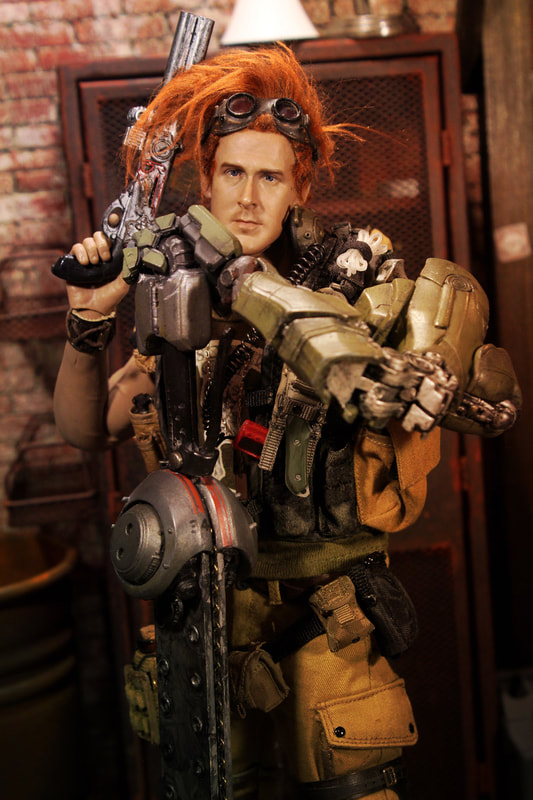 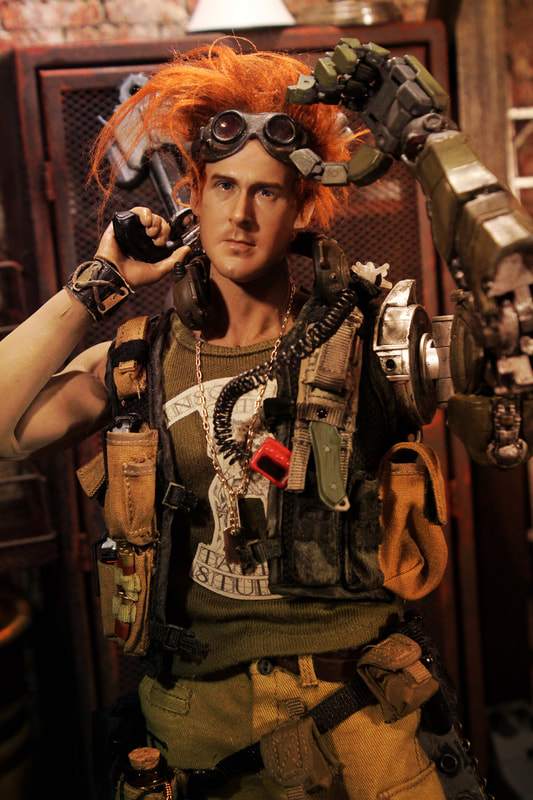 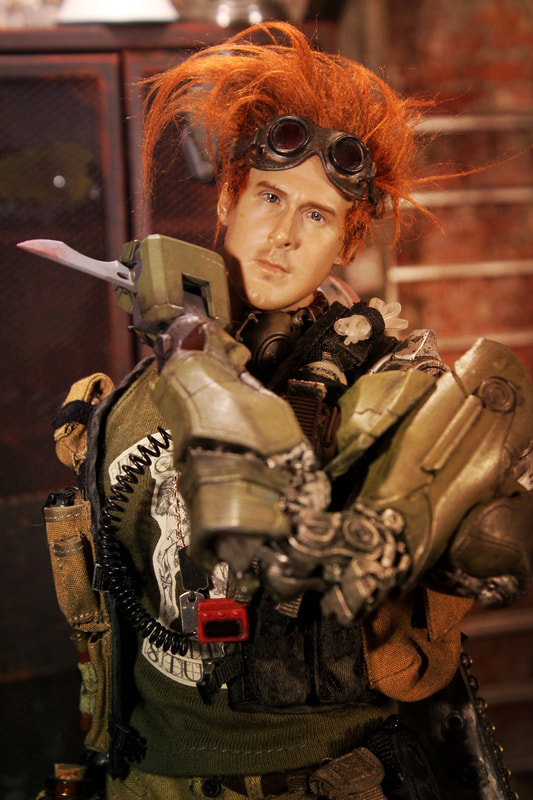 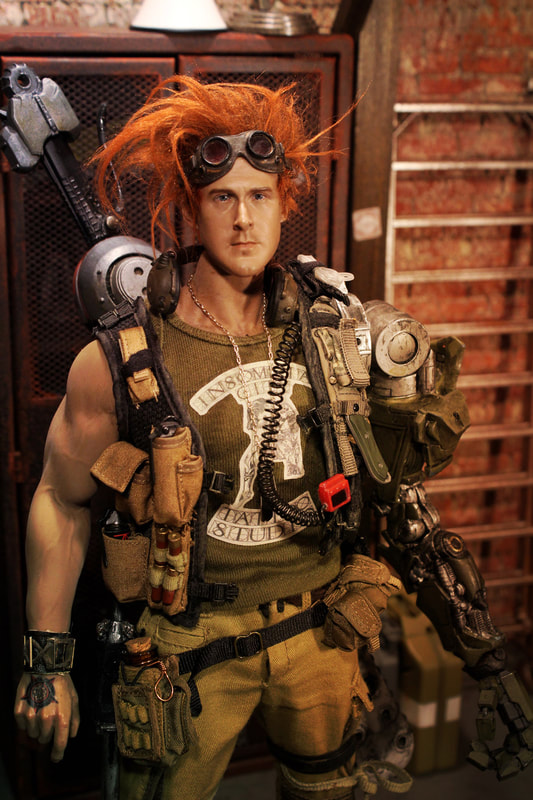 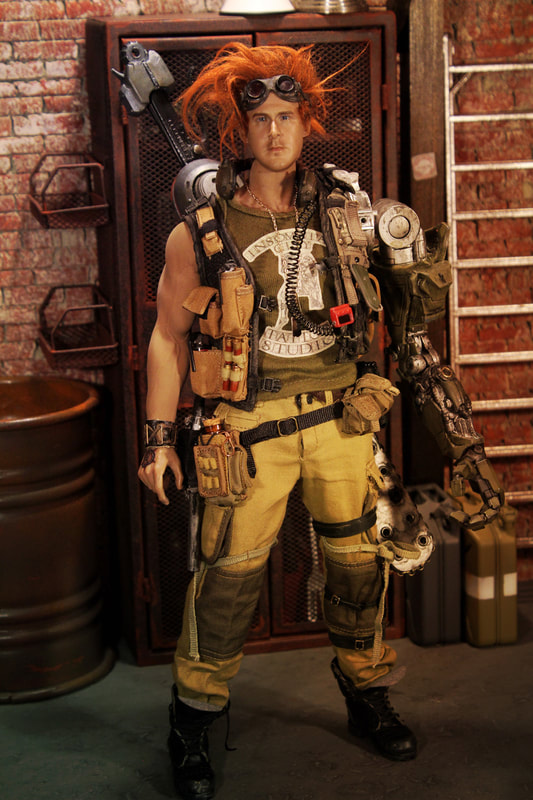 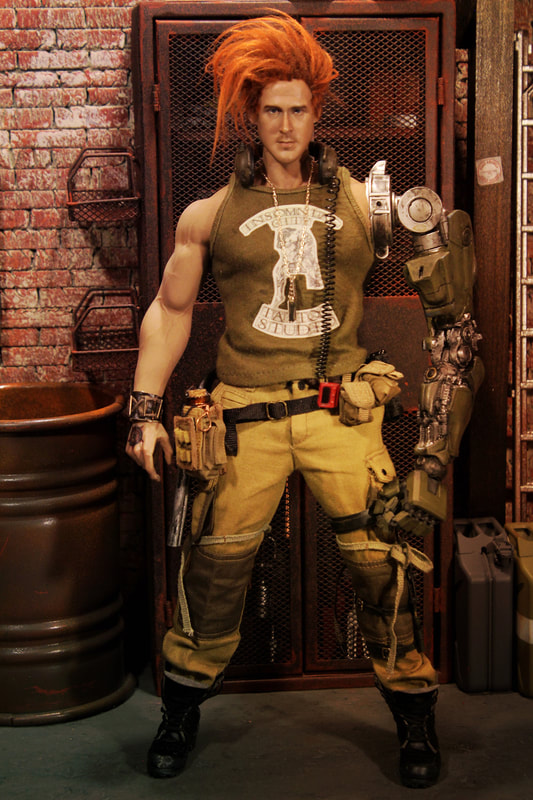 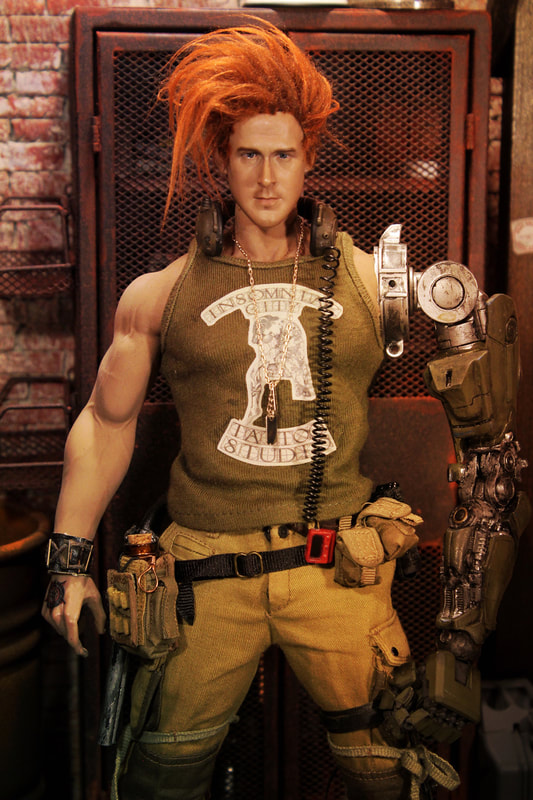 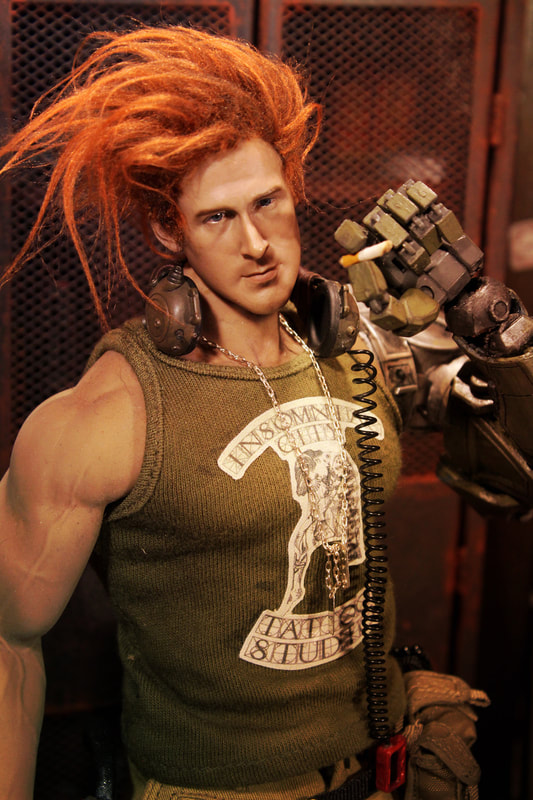 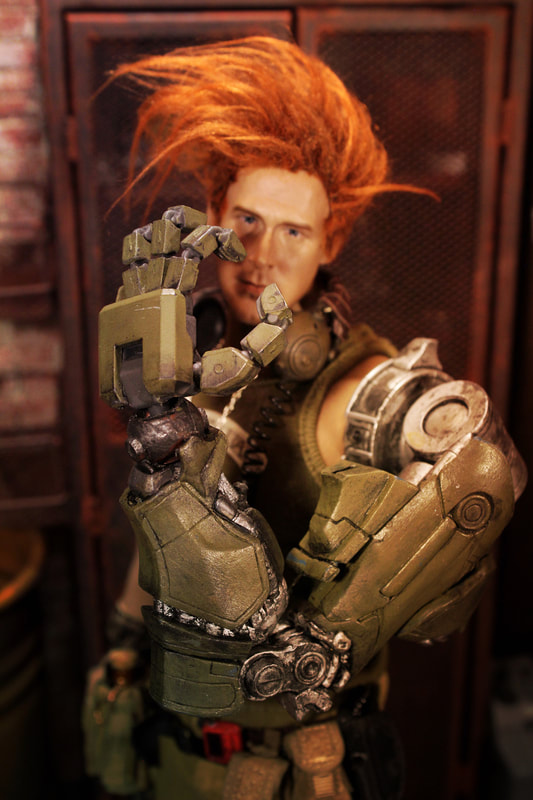 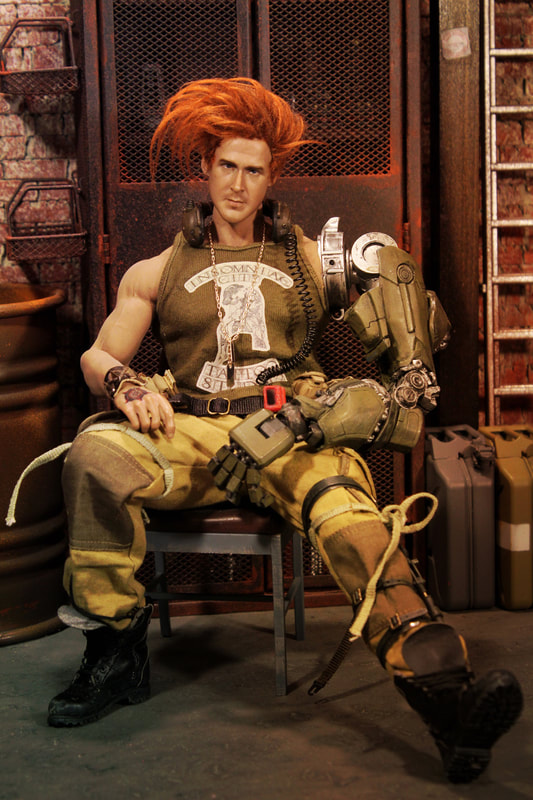 Art for Corbin's t-shirt uses stock from the incredible Faestock.
Powered by